One of the most fun and interesting places in Neo-Kobe, is definitely Center Plaza. It is the district where the citizens spend a lot of their spare time to have fun, to gamble or get drunk. There are bars, shops, clubs, a video game center and a cinema.
Not every part of Central Plaza is safe however. In a few zones of the district, 3 different types of metal creatures lurk around. Fortunately, the metal creatures are kept safely in protected zones.

Let us explore the several locations of Center Plaza.

The bartender of this small bar is from Spain, so he only speeks Spanish. This doesn't make communication easy, until Gilian can get hold of a translator he has to win in the video game center.

Here, the visitors can play many video games. If Gilian tries to talk to the gaming people, they get annoyed as their concentration is broken.
A game that plays a crucial role in SD-Snatcher, is the 3-D holo video game Snatcher Headhunter. Gilian has to beat the hi-score to win prices that will help his investigation. Because he has to beat the hi-score a second time, try to beat it the first time with a small margin, so it won't become too dificult to beat it a second time. The game is controlled by the numeric-pad of your keyboard. If your MSX doesn't have a numeric pad, you can use the following keys: 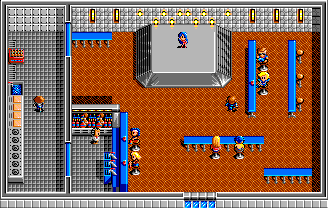 Outer Heaven is a club that can only be entered if you have a members card. The visitors of this club are entertained by the sensual dancer Isabella Velvet. It is owned by a strange guy named Napoleon. During Gilians first visit, Napoleon doesn't reveal his identity to Gilian, but instead he tells him to visit the cinema. There, he says, Gilian will be able to see Napoleon. This Napoleon turns out te be an important informant of Gilians murdered colleague Jan. 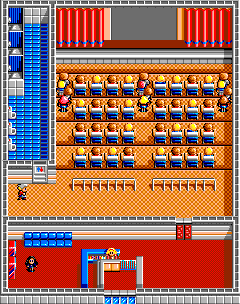 When Gilian visits the Cinema for the first time, it is almost empty. When the movie starts, all he can see is a blurry screen. A woman in the foyer tells him that he needs 3D-goggles to be able to see the film. These goggles can be bought from a shop called Joy Division part1. When he returns to the cinema with his goggles, it is too crowded to see anything! The only place he can see the movie screen is from the toilets.

From there Gilian watches a 3D remake of Godzilla, and finds out that the bartender of Outer Heaven is Napoleon:

The Joy Division stores can be found in several parts of the game. They can be recognized by the Konami double wave logo above the entrance. The one in Center Plaza is officialy called Joy Division part 1. Gilian has to visit this store a few time during his investigations in Center Plaza. He has to buy the 3D-goggles here. Drugs, ammunition and cinema-tickets can also be bought from this shop.