THE DEATH OF GIBSON

A very dramatic event in the game is the death of Jan Jack Gibson in the factory.
The factory which is filled with many metal creatures, is being invetigated by Gilian. He is trying to find his list colleague Gibson. At a certain point, Gilians Navi is picking some strange voices behind a wall. It turns out to be a conversation between Gibson and a guy named Baran Purnet:

Gibson:
"You are trapped, Purnet! Now I will avenge my late wife Alice. Prepare to die!!

Purnet:
"You are wrong Gibson! You found out too much about Queen Lab. You are dead meat sucker! I will soon reunite you with Alice!! Eat this!

Gilian asks Navi what is happening to Jan, but at the same time Petit Metal is detecting an approachin mechanical lifeform that is coming straight towards them. It is a very strong Army bear that comes crushing though the wall.

When Gilian finally defeats the Army Bear, he rushes into the next room to help his partner.... but too late. Purnet has muredered Gibson in a terrible way and has fled to an unknown location. 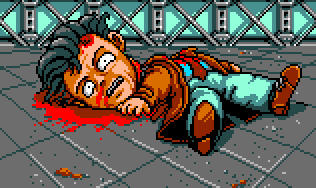 On his very first mission for Junker, Gilian is confronted with death in a horrible way. Terrified by the scene he has just witnessed, Gilian hurries back to Junker where he finds everyone mourning about the death of Gibson.

Now, Gilian has another difficult task. He has to go to Gibson's mansion, to inform Gibson's doughter Cathreena of the loss of her father. From now on, she's an orphan, as her mother Alice was murdered some time ago as well.

In the mansion, between the stuff Gibson has left behind, Gilian finds some important clues that lead him to Central Plaza.